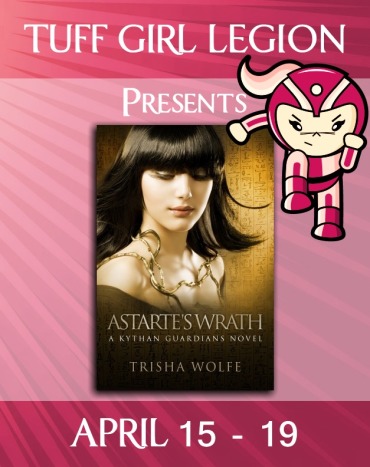 Two thousand years before Dez Harkly developed her secret powers, Guardian Astarte was vowed to protect by the binds enslaving her to the Egyptian pharaohs. Discover the prophecy that originated from a very different time, and spans generations to link two very different girls.

This is the beginning.

Set against the backdrop of the Battle of Actium, in the city of Alexandria, Star struggles with her guardian duties as her feelings for the newly named pharaoh of Egypt grow deeper. Not only is Caesarion her duty, he’s the son of Cleopatra, and he’s human. All of which makes their love forbidden.

But when a conspiracy linked to Caesar creeps into Alexandria, Star must choose between helping her fellow Kythan free themselves of their servitude, and protecting her charge—the last pharaoh—while Egypt burns around her.

New Adult/Mature YA: sexual content, drinking, drugs, violence, language, death, and other mature content intended for readers 17 and older. Astarte’s Wrath is a companion novel to Destiny’s Fire, but can be read as a standalone novel.

Trisha Wolfe has created such an amazing world inhabited by characters that I love to read about. As a companion novel to Destiny’s Fire, Astarte’s Wrath can be read independently and still pick up on the intricacies of the realm these books are set in.

Astarte (Star) is a Kythian – a race created to be unstoppable defenders of Egypt. In particular to guard and protect the Pharaoh, Xarion who also happens to be Star’s childhood friend. He is new to his position and believes that a man should make his own fate rather than just deal with what the Gods decide. In addition the new responsibility he has messes with the easy friendship he has always shared with Star. With a new race of magical beings on the scene, the threat against the Pharaoh is more real than ever.

I love the mix of Egyptian mythology, action and romance in this book – it’s fun and interesting. There’s always something happening but at the same time it always feels like a natural progression. I was entirely absorbed in the story from the first page until the last.

The characters are fantastic – from Star and Xarion to Phoenix. They’re well-rounded and flawed in the way that I love the characters I read about to be. The romance, the friendships – all of it. Bittersweet but beautiful to the end. The novel kept me hooked and I loved it.

I recommend this book for anyone who enjoys a well written story with well thought out plot, fantastic characters and a great mythological angle different from what I’ve read before.

And NOW…. here’s a bonus from Trisha!

Star narrows her eyes at me, her full, bottom lip puckering out the way it does when she’s in serious thought—and though I’m listening to her words, all I want to do is trap that bottom lip between my teeth. Nip it and caress it with my tongue.

“I knew you’d say that,” she says. “And that is precisely why I didn’t want you to know.” She raises her hand from my chest and swipes the wet hair from my forehead. Her body subtly moves against me with this action, and it drives me wild. “A possible retaliation by the guardians is just one more weighted burden on top of the many you already carry. You don’t need the added strain. Let me deal with Candra and the Kythan. They’re my kindred. As long as I’m their equal—in both power and status—I can protect you.”

This woman—the woman I’ve loved my entire life—is my protector. She not only guards against physical threats, but watches over my mental wellbeing. But I cannot allow her to carry all my problems alone anymore. I want to be her guardian, to be the one to comfort her when she’s fearful, and protect her against this world.

I tilt my head and suck in a deep breath. “This is why you won’t be with me.” I want her to admit it. If she finally confesses that our titles and her battle with the right course of action have been the only reasons for her kept affections, then by Gods…help me from laying her out on this tile and taking her—making her mine. I won’t stop.

“This is the only reason.” She nods again, and that is all the conformation I need. “Then I refuse to let them keep us apart for one more moment.” I grasp her face between my hands and claim her lips with mine.

Her lips are soft and warm as I achingly coax them into a fevered kiss, unable to hold back my desire for her. I had planned for our first kiss many times, imagined it over and over. The way I would caress her lips slowly and lovingly, conveying my affections. But every emotion I have ever felt for Star rushes to the surface all at once, and I can’t slow. I won’t. I won’t allow her a moment to question our actions, to reconsider us. I’m going to kiss her senseless—kiss the reason right out of her infuriatingly rational head.

Help Trisha and the Tuff Girl Legion get to 50 reviews on Amazon for the full scene release of the “Bath Scene” on Trisha’s blog! You can bookmark the bonus material here!

Bio: Trisha Wolfe is the author of the YA Steampunk DESTINY’S FIRE (Omnific Publishing), the NA Historical/Supernatural ASTARTE’S WRATH, and the upcoming YA Utopian FIREBLOOD from Spencer Hill Press, October 2013. Her NA Dark Fantasy OF SILVER AND BEASTS available May 2013. 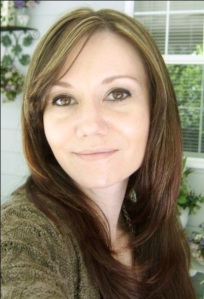 She’s the creator of YA Bound, a promotional site for the Young Adult genre. Also a member of SCWW and The Apocalypsies. Check out www.TrishaWolfe.com for more on her books and bonus material. Follow Trisha on Twitter @TrishWolfe and like her Facebook page for updates.

You can also enter to win a $10 Amazon gift card or bookmarks by entering. Click here to enter the Rafflecopter giveaway.