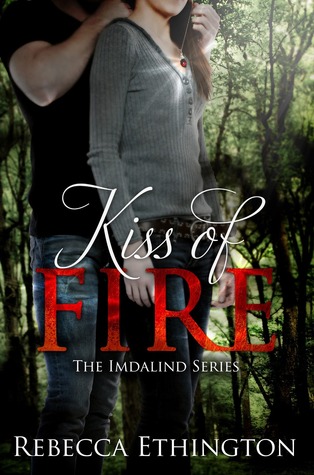 Synopsis (from goodreads):
Joclyn Despain has been marred by a brand on her skin. She doesn’t know why the mark appeared on her neck, but she doesn’t want anyone to see it, including her best friend Ryland, who knows everything else about her. The scar is the reason she hides herself behind baggy clothes, and won’t let the idea of kissing Ryland enter her mind, no matter how much she wants to.
The scar is the reason she is being hunted.

If only she knew that she was.

If only she had known that the cursed stone her estranged father sent for her 16th birthday would trigger a change in her. Now, she is being stalked by a tall blonde man, and is miraculously throwing her high school bully ten feet in the air.

Joclyn attempts to find some answers and the courage to follow her heart. When Ryland finds her scar; only he knows what it means, and who will kill her because of it.

After being bitten by a mysterious bug when she was five years old, Joclyn spent six months in a coma. Upon waking up she has a very strange scar on her neck and her eyes have changed colour. Her father can’t cope with the bizarre mark on her neck and leaves. To try to make ends meet, Joclyn’s mother takes a job as a cook for the wealthy Edmund. It’s there that Jos meets his son, Ryland. From that moment on the two are inseparable. Eleven years later the two are still best friends despite Ryland’s father threatening them to stay apart. On Jos’ sixteenth birthday she gets a letter from her father claiming that he knows the secret behind her scar – and it involves magic.

This summary has one of my pet peeves – it alludes to things that don’t happen until half way though the book! You can’t do that! But I can understand why they did it. Kiss of Fire is fairly slow to start. We get to see a lot about Jos – who she is and how she got that way, as well as her relationship with Ryland. The magic element isn’t fully developed until the second half of the book and I think that was a little too long. I found my attention drifting at parts. The character of Jos did frustrate me at times. She’s got no insight and it felt like she always needed someone to hold her hand. Her relationship with Ryland was sweet and I do love to read about fated mates however it felt odd – one day best friends and the next Ry is trying to kiss her with no in between? But this is a story with magic so maybe I should blame it on witchcraft.

The characters of Wyn and her ‘brother’ are interesting and I love Wyn’s effervescent personality but I felt like the brother was a heart beat away from being a love interest for Jos and I feel having a love triangle would detract from the strong bond that Wyn and Ry share.

I feel a little like a nitpicker but there was one thing about this story that really niggled at me. BFFs for eleven years – doing all sorts of crazy things that kids get up to and not once did Ryland see the scar on Jos’ neck. And yet, one afternoon of hairography with Wyn and she can see the mark that Wyn’s been so protective about showing off? I just find it a little hard to believe that he never once saw it especially how attentive he is to her every move.

The magic and creatures involved in this book are cool – I love that the author has gone and writing a paranormal novel without the usual monsters. From the birth stones, to the powers they have, these are cool creatures.

Kiss of Fire has a lot of twists and turns with a fairly exciting climax and a great lead in to the second novel however my disconnection with the characters and dislike of Jos will keep me from continuing this series.