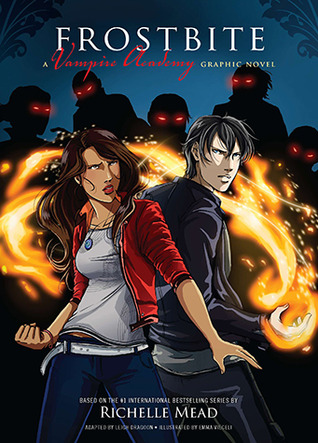 Synopsis (from goodreads):
The drama and romance continue in this 144-page full-color graphic novel adaptation of the second Vampire Academy novel, Frostbite, which was overseen by Richelle Mead and features beautiful art by acclaimed British illustrator Emma Vieceli.

When love and jealousy collide on the slopes, winter break turns deadly.

A Strigoi attack puts St. Vladimir’s on high alert, and the Academy whisks its students away on a mandatory holiday ski trip. But the glittering winter landscape and posh Idaho resort only provide the illusion of safety. When three students run away to strike back at the Strigoi, Rose must join forces with Christian to rescue them. Only this time, Rose—and her heart—are in more danger than she could have imagined.

Rose may have saved Lissa’s life in Vampire Academy but there are more threats on the Moroi Princess’ life. With the entire vampire world on guard, the school sends students to a luxury ski resort to try to keep them safe. Whilst St. Vladamir’s might be trying to protect their students it seems that trouble always seems to find Rose and her friends. With fantastic new characters and all the old favourites, Frostbite picks up right where Vampire Academy ended and continues with a lot of action and drama.

I’m not a graphic novel person. I’ve read perhaps one in the past three years. But with the Vampire Academy movies being released soon and the slight withdrawal I seem to go though in between instalments of the Bloodlines series, I couldn’t resist buying a copy of Frostbite last week (and I know I could have bought the first book but I was curious to see an artist’s recreation of Adrian).

Frostbite is the second book in the series but since I’ve read the original books I felt confident that I would be able to follow the graphic novel. And I did. This is a gorgeous visual adaptation of the series I love. There’s a fantastic recap at the start of the book which runs down the different characters that were introduced in the first novel as well as events which took place. If you have read the novel series then you will have no problems picking up this second book in the graphic novel series and there is enough details included that I think even people unfamiliar with Vampire Academy would be able to pick up on what’s going on.

I loved this adaptation. The illustrations are beautiful – and you can tell that the artist is very familiar with the source material. These pictures are fantastically true to the original story! Plot wise – all the important scenes are included. We get to see Rose’s uneasy relationship with her mother, the danger surrounding the Moroi as well as the uneasy political situation with the vampire royalty. Dimitri is around and his slightly inappropriate feelings for Rose are evident in the few pages devoted to it. Lissa and Christian are learning how to use their powers and we get to meet a new enigmatic Spirit user named Adrian (although at times I did get Christian and Adrian confused it was clear via context who was who).

I’m delighted that I decided to check out this graphic novel series. I am absolutely going to go and get the rest of the series that have been released so far. I think this series is a must have for fans of the novels as it gives an extra dimension to the story and characters.