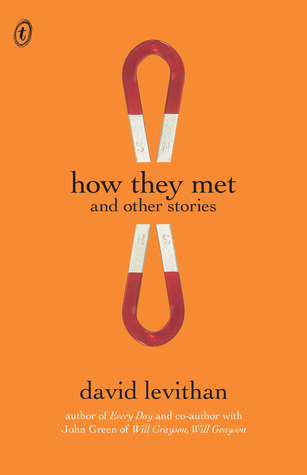 Synopsis (from goodreads):
Eighteen stories, all about love, and about all kinds of love.

From the aching for the one you pine for, to standing up and speaking up for the one you love, to pure joy and happiness, these love stories run the gamut of that emotion that at some point has turned every one of us inside out and upside down.

As David Levithan says in his introduction, How They Met (and other stories) is a book of stories about love rather than love stories. Each of the eighteen short stories gives a look into different types of love and relationships. With stories about the first sparks of attraction to tales of heartbreak and parental disapproval – this anthology covers a whole range of emotions and situations.

The stories contained in How We Met feature a variety of types of relationships – from two boys falling in love to a girl being heartbroken when her girlfriend moves on and heterosexual couples and their love stories. With many of the stories, the gender of the narrator is a little ambiguous for the first few pages and I liked the vagueness. Whilst sexuality is a theme in these stories, the unclearness of the narrator made it appear that the issues faced and situations the characters are in a universal (for the most part) regardless of sexual orientation.

For me, the sum is greater than the parts. I enjoyed many of the stories but I think the strength lies in how they fit together as a compilation. The variety is fantastic and yet they all manage to come together and feel like they each belong in the same collection.

Favourite Stories: Starbucks Boy, The Number of People Who Meet on Airplanes, Princes, A Romantic Inclination.

“Every two people cause and intersection.
Every person alters the world.” from Intersection

“Sallie and James had both life and the laws of physics working against them. You see, Sallie Brown and James Helprin were good friends.
Which adds a certain friction to our equation.” from A Romantic Inclination

Synopsis (from goodreads):
Seventeen-year-olds Craig and Harry are trying to set a new Guinness World Record for kissing.

Around them, Ryan and Avery are falling in love, Neil and Peter are falling out of love, and Cooper might be somewhere, but he is also, dangerously, nowhere.

Narrated, Greek-chorus style, by the generation of gay men lost to AIDS, this novel is a thematic companion to David Levithan’s groundbreakingBoy Meets Boy, which celebrates its tenth anniversary in 2013.

Two Boys Kissing is trademark Levithan: warm, sharp and real. It is also something new and completely extraordinary.

Two Boys Kissing is the story of Harry, Craig, Ryan, Avery, Cooper, Neil and Peter. They may be teenagers from different towns and have different backgrounds but their sexuality connects them. Craig and Harry are trying to set the world record for the longest kiss to prove a point. Exes but still friends, there’s no one the other would trust more to spend thirty-two hours, twelve minutes and at least ten seconds kissing. Ryan and Avery are in the grasp of new love with all the secrets and surprises that go along with getting to know someone new. Cooper’s life is falling down around him with the line between reality and real life blurred. And Neil and Peter have been together for a year – things are no longer new but there is a lot about each other lurking behind the surface. These characters cover the entire dating spectrum and have so many differences – their familial situations, their cultural backgrounds, their relationship statuses – and yet are part of a network because of one thing. Their sexual preferences.

With the novel being narrated by a chorus of gay men who have been where the teens are now, made their mistakes and danced their dances, this book is a unique perspective into the lives of the next generation of gay men. The writing is beautiful – slightly pretentious but perfect for the setting. I loved reading this book and found quotes I wanted to remember on almost every page. I’ve been a fan of David Levithan’s books since I read Boy Meets Boy ten years ago and thought Two Boys Kissing managed to convey the same message of acceptance and sexuality despite being darker and more realistic than his novel from a decade ago.

There’s a certain cyclical nature to this book – with the harassment of people based in their sexuality spanning across the characters despite their other circumstances. But the highlight is the support that they receive – from friends, family and complete strangers who want equality. I found some of the lines to be fantastic in their hope of future equality – “Max is a marvel to us. He will never have to come out because he will never have been kept in.”

All of the action in this book happens over just a couple of days, covers seven main characters in just over two hundred pages and yet I felt close to these characters. There’s enough detail to feel like I knew these boys, had experienced their heartbreaks and knew where they were going to go in the future – and I think this can be attributed to the unique narration style. The pop culture references are artfully inserted throughout the book with enough detail to feel included (book spine poetry with books I’ve read!) yet ambiguous enough to keep from dating the novel.

The authors note at the end of the book was fascinating to read – the record Harry and Craig were attempting to break was inspired by a true story as were other facets of the novel.  I loved this book . It’s full of hope and optimism with beautiful writing whilst still not glossing over the more painful aspects in life. I definitely recommend it to readers of all ages who enjoy a good story.