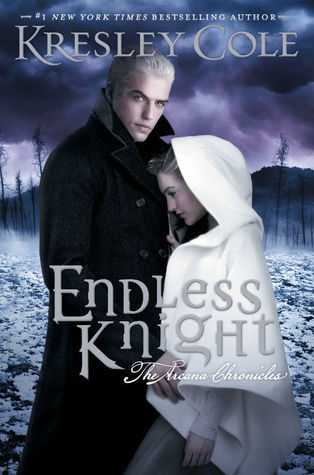 Synopsis (from goodreads):
Evie has fully come into her powers as the Tarot Empress, and Jack was there to see it all. She now knows that the teens who’ve been reincarnated as the Tarot are in the throes of an epic battle. It’s kill or be killed, and the future of mankind hangs in the balance.

With threats lurking around every corner, Evie is forced to trust her newfound alliance. Together they must fight not only other Arcana, but also Bagmen zombies, post-apocalyptic storms, and cannibals.

When Evie meets Death, things get even more complicated. Though falling for Jack, she’s drawn to the dangerous Endless Knight as well. Somehow the Empress and Death share a history, one that Evie can’t remember—but Death can’t forget.

Picking up where Poison Princess left us, Endless Knight starts with a bang! Evie has completely come into her Empress powers and is a force to reckoned with. Can the human cajun, Jackson cope with her supernatural destiny? Evie’s gang of Tarot characters have come to a truce to take out Death – but it’s not going to be easy. Other characters – like the Tower and Strength – come into play and Death is still haunting Evie’s thoughts.

I loved how Evie has evolved since the first novel. Where she was once a cheerleader and model student, now she’s the Empress – poisoned spurs, magical blood and all. She knows that she has a part to play in the Arcana duel but wants things to end differently this time around. Forming a truce with Selena (The Moon), Matthew (The Fool) and Finn (the Magician), Evie hopes that Jackson will still stay true to his word and lead the misfit group to Evie’s grandmother for more information about past games.

There’s so much action in this book! More than once I was worried that Evie and her friends weren’t going to survive intact as a group. The new ‘cards’ introduced were interesting and I liked to see their take on the game and their roles within it. The highlight for me was Death – he’s so much more than the devious voice in Evie’s head and finding out more about his and his history as a person and within the game was incredible. It really changed the game for me. I was a little surprised at just how ruthless characters are – not just ones you’d expect it from like Death, but Evie is definitely a little more brutal and cruel with the toll of the Flash and Death in her head taking its toll. Jackson is different from the first book and we get to see another side to the Cajun bad boy.

Romance wise this book does have some nice moments. Kresley Cole does write some sizzling male characters and some breathtaking romantic scenes. I fall in love with a new character every book I read of hers. Things advance and regress with her relationships and characters felt more realistic and less flawless because of some events.

I can’t wait for the third book in the Arcana Chronicles – especially after the cliff-hanger Endless Knight left us on!  I’m excited to see which other ‘cards’ are introduced as well as what happens to the characters that I adore like Jackson and Death.

This can be books I plan to read in the next three months or new releases for Spring.

5 books that are already released that I’m planning on reading:

Gameboard of the Gods (Age of X #1) by Richelle Mead

Angelfall (Penryn & the End of Days #1) by Susan Ee

The Iron King (The Iron Fey #1) by Julie Kagawa

And that’s a top ten…. plus one. I can’t wait for the new releases and the other books that I plan on reading… well I hope I get around to reading those too! Hope you guys have a lot of books you’re excited for in the next few months! Please let me know what books you can’t wait to read.