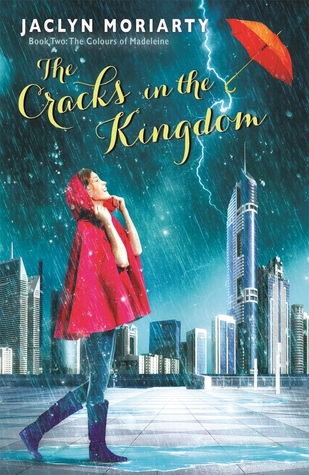 Synopsis (from goodreads):
Time slides around the world so strangely …

It’s not easy being Princess Ko. Her family is missing, taken to the World through cracks in the Kingdom, which were then sealed tightly behind them.

Now Princess Ko is running the Kingdom, and war is looming.

To help her find her family, she gathers a special group of teens, including Elliot Baranski of the Farms. He’s been writing secret letters to a Girl-in-the World named Madeleine Tully – and now the Kingdom needs her help.

Madeleine and Elliot must locate the missing royals, convince them of their true identities, and figure out how to unlock the dangerous cracks between the Kingdom and the World.

All before their enemies can stop them.

One of the best things that has happened to me in the past two years of blogging is discovering Jaclyn Moriarty’s books. She has a beautiful way of telling stories and this second book in the Colours of Madeline series did not disappoint.

Elliot Baranski, a boy who lives on a farm in a Kingdom named Cello, and Madeline Tully, a girl from the world we know in a city called Cambridge, are still communicating though a crack between the Kingdoms. A broken TV turned art installation and a malfunctioning parking meter allow the two to pass messages to and fro from Cello to Cambridge. Madeline is still not completely sure she believes the boy is real and the tales he tells about colours harming and seasons with minds of their own – but she lets best friends Belle and Jack in on the secret. Elliot is entrusted by the Princess to try to work out how to use the crack to bring her family back… that is if they are even there to begin with.

I love the characters in this series. They’re as vibrant as the colours which wreak havoc in the realm of Cello. Madeline is inquisitive and unwilling to take things on faith. She needs to find things out for herself and disbelieves things – even things in front of her very eyes – without some kind of scientific proof. Elliot is almost her opposite. He gives his all for everything he does and doesn’t do anything half-hearted. His belief in his family and himself is strong and he would do anything, sacrifice anything, for his loved ones. Where Madeline is theoretically based, Elliot is physical and spontaneous. They work well off each other despite being worlds apart – both physically and metaphorically.

This book is a great addition to the series. Elliot being inducted into the Royal Youth Alliance causes much drama. He has to covertly carry out secret missions for the Princess whilst at the same time pretending just to be there for the sake of uniting the Kingdom. His liaisons with Madeline grow strained under the pressures of the missions but throughout it all they are there for each other. Getting to experience what the different parts of the kingdom of Cello have to offer though Elliot’s eyes was interesting and I loved the trip to the Lake of Spells. Cello is a world that is full of magic and yet it feels believable because of how similar it is to the World Madeline inhabits.

At over 500 pages, this is a long book but it never felt that way. I couldn’t wait to find out what was next for Elliot and Madeline and their friends. The plot took me places I wasn’t expecting and I enjoyed the journey. There are surprises and a lot of questions still to be answered. What happened to the Royal Family? Will they come back? Why are the cracks between the worlds? What’s the deal with the rebels? And whilst many of these questions were not either fully or partially answered – I felt so involved in the story that I didn’t mind not knowing.

The ending was one I wasn’t anticipating but perfect. That said – I’m incredibly eager to find out what Jaclyn Moriarty has next install for Elliot, Madeline and the people of the two Worlds they come from. I enjoyed every step in this novel and recommend the series for fans of well written and exciting young adult literature.

Thanks to Pan Macmillan for the review copy. 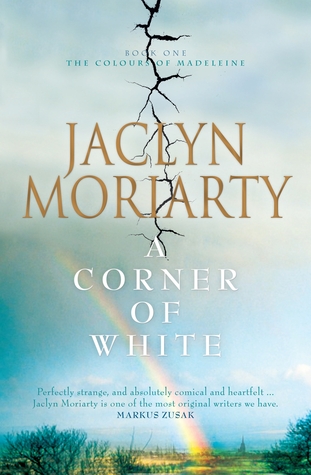 A Corner of White (The Colours of Madeline #1)

Elliot Baranski lives in Bonfire, the Farms, the Kingdom of Cello – where seasons roam, the Butterfly Child sleeps in a glass jar, and bells warn of attacks from dangerous Colours.

They are worlds apart – until a crack opens up between them; a corner of white – the slim seam of a letter.

A mesmerising story of two worlds; the cracks between them, the science that binds them and the colours that infuse them.

She knew this.
That philematology is the science of kissing.
That Samuel Langhorne Clemens is better known as Mark Twain.
That, originally, gold comes from the stars.

The summary both perfectly sums up this book and at the same time doesn’t begin to touch on why I enjoyed reading it so much.

A Corner of White is a tale of two cities – or more appropriately, a stories of two worlds. Madeline Tully, a fifteen year old who lives with her mother in the English city of Cambridge. After running away from her father two years ago, the two of them have made a life for themselves in the colourless and drab college town.

In a parallel world where seasons change moment to moment and the rare Butterfly Children with magical powers appear in glass jars, the Kingdom of Cello is home to a boy named Elliot Baranski. Having lost his uncle and father to a purple attack, Elliot has made it his mission to track down the colour who took his dad away and bring him home.

Madeline and Elliot stumble upon a crack in the fabric between the worlds and start writing to one another. With lives so different and yet eerily similar, the two come to grips with the voids in their own lives and try to live full lives again.

I loved the Kingdom of Cello. I’ve read a few novels with parallel universes but never have a read a world that is so similar to the present day in which I live – and yet at the same time so incredibly different. The idea that colours can cause blindness, brutality or influence one’s thoughts and feelings so tangibly is such an interesting and brilliant concept.

Madeline and her comrades at Cambridge in the World are characters that I enjoyed reading about. Belle and Jack are believable as slightly eccentric sidekicks with their own little quirks. Elliot is a likeable hero too. He’s strong and brave but he has enough flaws of his own to keep him interesting. I loved how Madeline and Elliot were so different and yet so similar.

This novel is interesting, imaginative and beautifully written. The colours – real or flat, in the World or in the Kingdom of Cello – were interwoven throughout in a way that made the worlds collide in such a way that made me believe in the existence of Cello. I thought it was so clever how the author managed to combine the real with the imaginary, magic with science, whilst still delivering a story that kept me interested right up until the last page.

With thanks to Pan Macmillan and the Reading Room for the review copy.