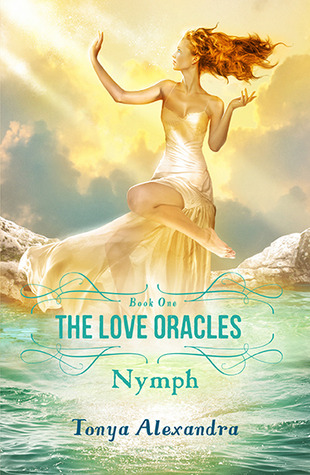 Please feel free to check out my interview with Tonya as a part of the Nymph blog tour hosted by Walker Books Australia!

Synopsis (from goodreads):
An idyllic Greek island. Obsessed demigods. A fallen nymph. A mortal boy. Merope, a beautiful but faded star nymph, is banished to Earth for displeasing the gods. She tries to fit in, go to school and live a normal “human” life. And then she meets Lukas … but relationships between men and goddesses are forbidden. Will their love grow? Or will Merope and Lukas feel the wrath of the gods?

Merope has lived for thousands of years as a star nymph in the land of gods, Olympus. But life isn’t always easy for the faded star nymph. She’s been exiled to Earth and has had to leave her sisters behind. Living like a mortal is worlds apart from her other life but Merope is starting to see that there might be benefits to a human existence. One of which is the gorgeous and kind Lukas, a farm boy with exquisite imperfections. Romantic relation between a goddess and a mortal are forbidden but the way Merope feels is like nothing she’s felt before in all her immortal existence. Is a chance at forbidden romance worth the punishment the gods met out?

I’ve read quite a few modern takes on classic myths but never before have I read one about star nymphs. I was intrigued by the idea and the romance angle drew me in. Merope is ancient in comparison to mortals but rather naive about so many things. She’s lived in the shadow of her sisters her entire life and would prefer to hide in corners than take centre stage. But she has some spark to her. Rejecting a god who has been after her for centuries and then living with the consequences of her actions. For a nymph who has only ever called Olympus home, being exiled to modern-day Greece is such a shock but Merope does try to make the most of things. She enrols in a local school to learn as much as she can about humans. She makes some friends and she even goes as far as trying to embrace technology.

And then there’s Lukas. He’s hideous perfection in Merope’s eyes. The son of a local farmer with whom Merope falls for at first sight. I’m not usually one for instalove. But their initial chemistry works for me because if I can suspend belief and believe in mythological gods on Earth wearing Nike and driving sports cars, then I can believe in love at first sight within the world this book exists in. I would have liked to see rationale behind their fierce feelings been built on throughout the book (some kind of moments where despite already being in love, have causation behind falling deeper) but they do have some tender scenes and I can barrack for them as a couple.

Along for the ride on Earth – we get to see other Greek heroes experience life the mortal way. Merope’s Uncle Pro (Prometheus) is helping her adapt in the foreign place and I liked his presence in her life. Merope’s mother is an interesting character who I do hope we get to see more of in the series but the character I wanted to read about most was Hercules. Herc isn’t anything like the hero Disney made him out to be. He’s arrogant and conceited and has a proclivity for nymphs but he’s so entertaining. Gorgeous and vain, he is everything Lukas isn’t – and he knows it. A hero in the legends of old, his presence in the mortal world shakes things up a bit. I love reading his interactions with the modern world and how Merope reacts to him. He brings the a fierceness out in her and made her a little more real to read.

Nymph, the first book in the Love Oracles series, is an entertaining read. It’s surprisingly funny in parts and the romance is sweet and pure. There’s friendship and the pressures of family all coexisting in a lovely re-imagining of ancient Greek mythology. An easy read, this book is suited for younger teens and older readers who enjoy stories about true love and soul mates.

Thanks to Walker Books Australia for the review copy.