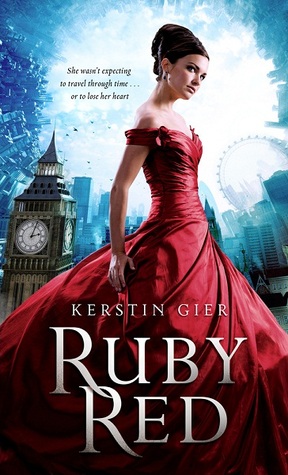 Synopsis (from goodreads):
Sixteen-year-old Gwen lives with her extended – and rather eccentric – family in an exclusive London neighborhood. In spite of her ancestors’ peculiar history, she’s had a relatively normal life so far. The time-traveling gene that runs like a secret thread through the female half of the family is supposed to have skipped over Gwen, so she hasn’t been introduced to “the mysteries,” and can spend her time hanging out with her best friend, Lesly. It comes as an unwelcome surprise when she starts taking sudden, uncontrolled leaps into the past.

She’s totally unprepared for time travel, not to mention all that comes with it: fancy clothes, archaic manners, a mysterious secret society, and Gideon, her time-traveling counterpart. He’s obnoxious, a know-it-all, and possibly the best-looking guy she’s seen in any centrury . . .

Gwen has always known that time travel is possible. Rare members of her family have been born with the time travelling gene allowing them to go back into the past. Her cousin Charlotte is one of the chosen few and has been training for her trips to the past since birth. But Gwen unexpectedly travels through time and isn’t ready for the pressures that being a time traveller brings. Her clothes are wrong, she can’t fence and languages aren’t her forte. Lucky for her that Gideon’s family also have the time travelling gene and whilst he may be unbearable – at least he knows Victorian era manners.

I’ve been excited about this book for a while and am glad that I finally took the plunge. As the first book in a series, Ruby Red does a brilliant job at laying the groundwork. Gwen is as new to the world of travelling though time as we are and its great learning about how the gene works as Gwen learns herself. There are some amazing characters from the best friend Lesly who is an expert at using the Internet, pop culture and has Gwen’s back no matter what to Gwen’s eccentric and possibly psychic Great Aunt Maddie. I was impressed with the wealth of detail regarding the difference between the past and present as well as some of the difficulties one might face if they were to go back in time. Another thing I loved was the insufferable Gideon – gorgeous yet obnoxious. It’s great to have a potential love interest that the heroine isn’t head over heels for the moment she meets him. There’s some bickering and frustration that I found to be fantastic.

There is a lot going on in this book and by the end a lot is still a mystery. Whilst it’s great at making me want to read the second book, Sapphire Blue, it meant that in terms of action, Ruby Red fell a little short. With all the descriptions and back story, there wasn’t a huge climax in terms of drama and activity in this first book. That said, and without having read the next book yet, Ruby Red is fantastic at laying the ground work. There’s so much happening – from Gwen’s inexplicable ability to talk to ghosts to a future hinted at though one of Gwen’s travels. It’s exciting and I loved being a part of the journey. The time travel is different from ones I’ve read before and I liked this particular take. The family mystery and quirky relatives are fascinating yet formidable.

Ruby Red was originally written in German and I wonder if perhaps that was a reason for why the novel read a little young for me. There were times when the book felt like it was more suitable for middle grade rather than young adult but it’s possible that some of the nuances were lost in translation.

I enjoyed this book and bought a copy of Sapphire Blue as soon as I finished Ruby Red! The main character, Gwen, is exciting, brave and intelligent. The banter with Gideon is a pleasure to read and there are so many secondary characters who are both mysterious and amusing. This was a great book to read and I liked the different take on time travel.